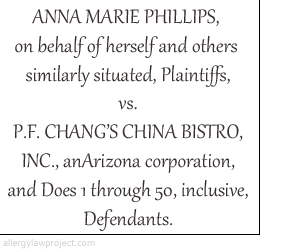 On August 6, 2015, the United States District Court for the Northern District of California dismissed the claims brought by Anna Marie Phillips against PF Chang’s restaurant.  (Click here to see our previous post about the case). Ms. Phillips’ case was based on the allegation that charging customers with celiac disease extra fees for items on a gluten-free menu was discrimination. The court’s reasons for the dismissal are disconcerting.  Also this case illustrates the importance of Department of Justice filing Statements of Interest in cases such as these to defend the integrity of the law.

The Court Held that Celiac Disease is not a Disability 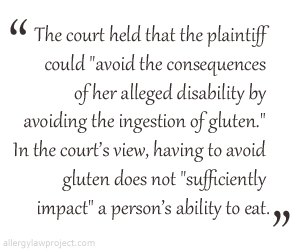 The most troubling aspect of the decision is the court’s conclusion that celiac disease is not a disability. The court could not find any case law dealing directly with the issue. The court used the tests for disability as provided under both the ADA and a California non-discrimination law known as the Unruh Civil Rights Act (Cal. Civil Code §51 et seq.). The standards under both laws are essentially the same. The only difference between the two laws is in their definition of disability; the Unruh Act requires that a condition must “limit a major life activity” to be considered a disability whereas under the ADA, the condition must “substantially limit a major life activity” (emphasis added). The court held celiac disease does not meet either definition.

Essentially, the court found that the avoidance of gluten does not limit a major life activity. The court held that the plaintiff could “avoid the consequences of her alleged disability by avoiding the ingestion of gluten.” In the court’s view, having to avoid gluten does not “sufficiently impact” a person’s ability to eat.  The court based its decision in part on a case involving dietary restrictions of a person with diabetes. See Fraser v. Goodale, 342 F.3d 1032, 1045 (9th Cir 2003). In quoting Fraser, the court noted, “Though we hold eating is a major life activity, we do not thereby invite all those on a diet to bring claims of disability… We must carefully separate those who have simple dietary restrictions from those who are truly disabled. At the same time, we must permit those who are disabled because of severe dietary restrictions to enjoy the protections of the ADA.” Id. at 1045. Apparently, the court viewed celiac disease as a “simple dietary restriction” not deserving of ADA protection.

Discrimination not Found in a Surcharge

The court held that the surcharge on gluten-free items was not discrimination. The court discussed the DOJ settlement involving Lesley University. In the Lesley case, a student brought a case against the university for requiring her to purchase a meal plan that did not offer any gluten-free items.  As part of the settlement, Lesley agreed to make accommodations to provide gluten-free menu choices. The settlement was reached because it was mandatory for all students at Lesley University to participate in the meal plan.   In contrast, according to the Court eating at PF Chang’s is not mandatory. In fact, the Court found that PF Chang does not have to offer gluten free meals.

Further, the court held the gluten-free dishes are distinct from their gluten-based counterparts.  Preparing gluten-free meals requires more than just slight alterations in the menu. It requires different preparation methods in order to avoid and replace gluten. The extra effort justified, per the court the increase in price.

The plaintiff argued that PF Chang’s advertised a gluten-free menu in order to attract customers with celiac disease. The advertising and then charging a premium for gluten-free items, argued plaintiff, constituted intentional discrimination. However, the court disagreed and held that there is no basis to support that claim.  The court also dismissed claims of unfair business practices and unjust enrichment.  The court granted the plaintiff leave to amend the complaint, even though the court had “reservations about whether plaintiff can state a viable claim.” It remains to be seen whether the plaintiff can cure her complaint sufficiently to survive another challenge. 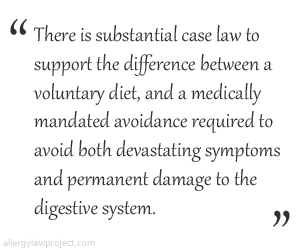 The question whether a person has a disability or not is an individual inquiry. In other words, just because an impairment is found not to be a disability for one person does not dictate the same result for another person. There is certainly cause for concern that other courts might use this decision as precedent. However, there is also substantial reason to believe this decision could be reversed on appeal.

Curiously, the court relied on precedent and utilized reasoning in reaching its decision that predates the passage of the ADA Amendments Act. The ADA Amendments Act of 2008 was intended to clarify the scope and meaning of disability and redress court decisions that found that conditions like diabetes were not disabilities. This Court decision seems to return to the old days pre 2008 and when courts routinely dismissed cases based on findings that a plaintiff was not disabled. For more on the ADA Amendments Act visit http://www.ada.gov/nprm_adaaa/adaaa-nprm-qa.htm.

It is particularly surprising that the PF Chang’s court disregarded clear precedent that the determination of disability is supposed to made in an unmitigated state. For example, in determining whether a person has a mental disability, the Court is supposed to consider the person’s impairment without medication. Likewise, it is troubling that the Court here did not consider the plaintiff’s impairment when exposed to gluten.  It is surprising to see a finding that celiac disease does not limit a major life activity.  There is substantial case law to support the difference between a voluntary diet, and a medically mandated avoidance required to avoid both devastating symptoms and permanent damage to the digestive system.

We will continue to follow this case as it progresses through the court system as the issues raised are not important only for the celiac community but for the allergy community as well.