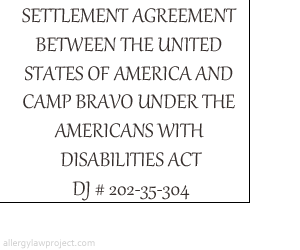 According to the Settlement Agreement and a Press Release issued by the United States Department of Justice, the complaint was originally filed by family that had tried to enroll their 7 year old child with Camp Bravo. Because the child has epilepsy, the parents requested that the camp administer a lifesaving medication called Diastat in the event of a prolonged or acute repetitive seizure. Diastat is a premeasured, rectal gel formulation of diazepam designed to be administered by laypersons to treat life threatening seizures.

In 2011, Camp Bravo refused the parents’ request to administer the medication in the event of a seizure and the child was unable to attend camp as a result. The family tried to enroll their child in Camp Bravo again in 2012, but despite the fact that the camp had now hired a staff nurse, Camp Bravo maintained its policy that campers must self-administer medications, except for epinephrine.  Again, the child was unable to attend camp and the child’s parents filed a complaint alleging that Camp Bravo discriminated on the basis of disability in violation of Title III of the Americans with Disabilities Act (“ADA“).

Clear Direction from the Department of Justice 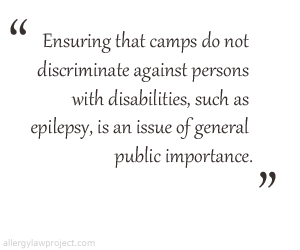 The United States investigated and according to the Settlement Agreement  “determined that the camp discriminated against the Camper by denying her, on the basis of disability, the opportunity to participate in or benefit from the goods, services, facilities, privileges, advantages, or accommodations of Camp Bravo, in violation of 42 U.S.C. § 12182 and 28 C.F.R. § 36.201.  Specifically, Camp Bravo discriminated against the Camper by failing to make reasonable modifications in its policies, practices, or procedures for the administration of medications when necessary to afford the Camper an opportunity to participate in and benefit from its goods, services, facilities, privileges, advantages, and accommodations.  42 U.S.C. § 12182(b)(2)(A)(ii); 28 C.F.R. § 36.302.” Camp Bravo, in contrast, denied any violation of law.

In the Settlement Agreement announced June 24, 2015, the Department of Justice stated, “It is the United States’ position that it generally will be a reasonable modification required by title III of the ADA for certain public accommodations, such as camps and child care service providers, to train laypersons to administer Diastat.” The Department of Justice further states, “Ensuring that camps do not discriminate against persons with disabilities, such as epilepsy, is an issue of general public importance.  The United States is authorized to investigate alleged violations of title III of the ADA and to bring a civil action in federal court in any case that involves a pattern or practice of discrimination or that raises issues of general public importance.  42 U.S.C. § 12188(b).”

The terms of the Settlement Agreement provide that Camp Bravo will welcome the child in future summers, will train all supervisory staff and all employees who supervise campers on the camp’s obligation not to discriminate pursuant to the ADA, will notify the United States’s counsel any time a child with epilepsy seeks enrollment and will document the child’s attendance at camp, and will train all staff responsible for the care and supervision of any child with epilepsy. Finally, the Settlement Agreement provided that Camp Bravo will pay $8,000 in damages to the family that filed the complaint for discrimination.

A Victory for Accommodation 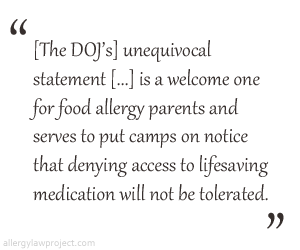 While food allergy families may notice that Camp Bravo in this case did allow staff to administer epinephrine, the statements made by the Department of Justice are particularly instructive as people navigate battles with summer camps on the epinephrine front (for more information on the obligations of public and private camps, see our previous coverage about summer camps).  Indeed, the Department of Justice’s unequivocal statement that “ensuring camps do not discriminate against persons with disabilities” is a matter of “public importance,” is a welcome one for food allergy parents and serves to put camps on notice that denying access to lifesaving medication will not be tolerated.