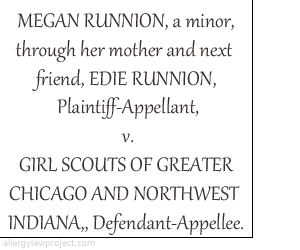 For lawyers who haven’t blocked out the early days of law school, Federal Rule of Civil Procedure 12(b)(6) stands out as one of those major stop-a-case-before-it-starts rules.  For those reading this piece, all you need to think about is that when you file a case in court, it needs to be a court that has power to help you under the law and that the help you’re seeking is something you can get at all.  On May 8, 2015, the 7th Circuit issued a ruling that, though not involving an individual with food allergies, does involve the applicability of Section 504 of the Rehabilitation Act, the same Section 504 that food allergy parents and guardians know all too well.

In Runnion v. Girl Scouts of Greater Chicago and Northwest Indiana, Edie Runnion filed suit on behalf of her minor daughter, Megan.  She alleged that Megan’s rights under Section 504 had been violated but the federal court tossed her claims under Rule 12(b)(6) and didn’t even allow her the chance to adjust her complaint and try again.  The court had ruled that allowing amendment of the complaint was futile because Section 504 didn’t cover the Girl Scouts.

The Girl Scouts of America are a membership organization for young girls and are organized locally and nationally.  Below is their “Promise and Law:”

On my honor, I will try:
To serve God and my country,
To help people at all times,
And to live by the Girl Scout Law.

I will do my best to be
honest and fair,
friendly and helpful,
considerate and caring,
courageous and strong, and
responsible for what I say and do,
and to
respect myself and others,
respect authority,
use resources wisely,
make the world a better place, and
be a sister to every Girl Scout.

To quote the Seventh Circuit’s summary of the facts:

Plaintiff Megan Runnion was active in a Girl Scout troop run by defendant Girl Scouts of Greater Chicago and Northwest Indiana, which is the largest regional Girl Scout organization in the United States. Megan is deaf. For several years she benefitted from sign language interpreters provided by the Girl Scouts that enabled her to participate fully in the troop’s activities. The Girl Scouts then stopped providing interpreters. When her mother complained, Megan’s entire troop was disbanded. 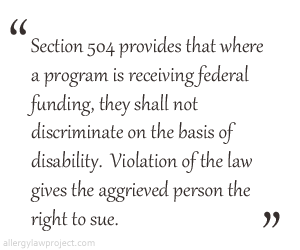 The refusal to provide an interpreter and the disbanding of the troop were both alleged to be violations of Section 504.  Section 504 provides that where a program is receiving federal funding, they shall not discriminate on the basis of disability.  Violation of the law gives the aggrieved person the right to sue.  The appeal from the dismissal of Megan’s case has nothing to do with whether or not the Girl Scouts had to provide an interpreter, just whether she has the right to bring a case against the Girl Scouts under Section 504.  The main question ended up being if the federal funding of the Girl Scouts subjected them to Section 504.

Megan’s complaint in late 2012 alleged that Section 504 applied because the Girl Scouts received federal funding, however, the court ruled at the time that she had to allege much more.  Because of the disparity in power and access to information, usually stating your claims to the court in an opening document like a complaint is enough to get the ball rolling and allow you to do more investigation (called “discovery”) in the case as it moves along.  Even if there are specifics missing, a Plaintiff is generally permitted to go back and amend their complaint to fix whatever errors the court perceives and try again.  In the case of Megan Runnion, however, the court not only said her complaint was deficient, they ruled in favor of the Girl Scouts, not allowing her to make a different argument for why the Girl Scouts were subject to Section 504.

Here’s where the case gets interesting.  Megan was able to jump through some procedural hoops to get another chance at amending her complaint providing more detail to address the deficiencies claimed by the Girl Scouts. The Girl Scouts filed another motion to dismiss arguing that the Girl Scouts are not principally engaged in providing education or social services to girls and therefore did not have to comply with section 504 despite taking federal funding. The district court granted the Girl Scouts motion to dismiss in March of 2014 and held that allowing amendment of the complaint would be futile.  On appeal, the Runnion argued that the lower court had made a mistake in dismissing the complaint without allowing amendment and in concluding that section 504 did not apply to the Girl Scouts.

Before 2009, Megan would have been allowed to amend her complaint as a matter of course, but the Girl Scouts argued that an amendment to the federal procedural rules changed the landscape a little bit.  The Girl Scouts claimed that when the motion to dismiss was received, before the court ruled on it, a given Plaintiff should amend their complaint right away or loose their chance to do so later.  The Seventh Circuit didn’t buy the argument and went on to consider the fact that the lower court saw the Girl Scouts as a private membership organization and not as an educational one.

If you’re following along, page 20 is where the discussion of the court becomes less about procedure and more about where the Girl Scouts are as an organization for applying Section 504.  The lower court tried to imply Section 504 applies to a private membership organization only if they’re open to the public and are providing a public service but the Seventh Circuit found that since the Rehabilitation Act goes to the trouble to discuss private organizations, Congress must have meant to include some private groups.

The Seventh Circuit Court of Appeals found, “that the Rehabilitation Act covers private organizations not open to the public if they receive federal financial assistance within the scope of § 794.”  Id. at 21.  It bears repeating – a private organization receiving federal funding falls under the Rehabilitation Act.  Even so, a private organization receiving federal funding could be exempt if they are not “principally engaged in the business of providing education, health care, housing, social services or parks or recreation.”  Id. (internal citations omitted).  Church groups that do educational activities, for example, may be seen as not principally engaged in those activities. 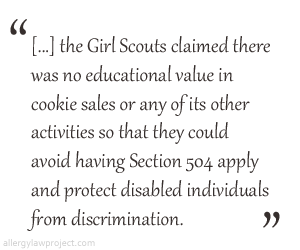 To fight Megan’s complaint as amended, the Girl Scouts had argued in part that there was no principal social or educational component or value in the activities they did with girls in the organizations.  While Edie Runnion asserted that cookie sales, for example, had educational components (such as fostering business skills) the Girl Scouts claimed there was no educational value in cookie sales or any of its other activities so that they could avoid having Section 504 apply and protect disabled individuals from discrimination.

The Seventh Circuit Court of Appeals considered whether Edie Runnion had asserted sufficient facts at an early stage of litigation to show that the Girl Scouts “principally engaged” in any one of the businesses listed above, such as providing education and were therefore subject to suit under section 504. The Court rejected the Girl Scouts’ claims that being involved in a mix of activities would not amount to principal engagement and concluded that the Girl Scouts could not evade application of section 504 by asserting that they were not principally engaged in any one type of services.  In other words, an organization that engages in some educational activities and some social services or recreation activities will be assessed by adding together those services in order to meet the requirement for the law to apply.  The Court referenced the argument of the United States, which filed a Statement of Interest in the case, noting that if 40% of an organizations efforts are used to, say, serve food (per a footnote in the decision), and 35% on education plus 25% on social services, it could be argued the principal purpose of an entity was to sell food (the 40%).  Combine education and social services, however, and you’ve got 55% – or principal engagement.  Id. at 26.

Luckily, with this new ruling, Megan can continue in the lower court with her case and argue that 504 applies and that the Girl Scouts violated it when they would not provide an interpreter as well as when they disbanded and re-formed without Megan to try to avoid providing services.

Considering the rise in the incidence of food allergies and the impact of food allergies on childhoods of both boys and girls, scouting organizations as well as other clubs that are an important right of passage in childhood need to come to terms with who they are and what they are obligated to do as the result of accepting our federal tax dollars.  On their honor, will they try to be inclusive? Will they take affirmative steps to not only keep food allergic kids safe but to value them as scouts and members? To learn from the participation of scouts and members with disabilities rather than seek to exclude anyone who is different?

The idea that organizations that tout personal responsibility, that seek to to teach fairness and honor to children, and aspire towards “making the world a better place” would defend against claims of discrimination by denying everything an organization has previously claimed it stood for signals an unwillingness to be inclusive that ought to spur a greater dialogue.

We’ll watch this case with interest and hope to share more with readers as information becomes available.