The Big IDEA – Lessons from the US Department of Education

On April 15, 2015, the United States Department of Education’s Office of Special Education and Rehabilitative Services issued a letter about processes to resolve conflicts between schools and parents in achieving FAPE (a free appropriate public education) where IDEA (the Individuals with Disabilities Education Act) is involved.  Remember that IDEA would apply in the food allergy context where a student who has a different disability (such as a learning disability) in addition to their food allergy.

In the letter, the Department of Education’s SERS Office writes:

“It has come to our attention that some public agencies may be filing due process complaints concerning the same issue that is the subject of an ongoing State complaint resolution, ostensibly to delay the State complaint process and force parents to participate in, or ignore at considerable risk, due process complaints and hearings. Increased costs and a potentially more adversarial and lengthy dispute resolution process are not in the best interest of children with disabilities and their families.”

Background – Due Process Versus State Complaints Regarding a FAPE 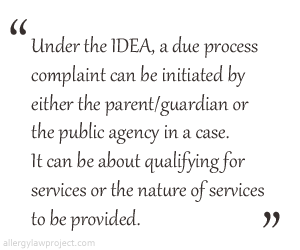 The letter (download a pdf copy here) seeks to offer guidance in dispute resolution in these situations.  One of the useful aspects of the letter is the breakdown of due process complaints under IDEA.  Simply put, a due process complaint can be initiated by either the parent/guardian or the public agency in a case.  It can be about qualifying for services or the nature of services to be provided.  The timeline is a swift one, more than 15 days cannot elapse before a meeting about issues if the complaint is initiated by a parent and for agencies, a complaint can’t be made from their side without a resolution meeting first taking place.  After the first resolution meeting, 30 days are given to come to a resolution to the satisfaction of the parent, or a due process hearing will occur.  The reverse isn’t true if an agency initiates the process, but the letter encourages that “public agencies should strive to resolve disputes informally.” Id. at 2.

There is some nuance to the process as laid out in the letter, as the agency can ask that where a parent isn’t participating in the resolution process (and that reasonable efforts by the agency have been documented), a dismissal of the parent’s complaint may be requested.  On the other side of things, if the agency isn’t meeting deadlines or participating, a parent can ask that a hearing officer start the due process hearing dynamic.

The letter goes on to highlight that under IDEA the parent in the case who prevails in an action under section 615 of the IDEA can get reasonable attorney’s fees from the public agency.  Reduction of the fee can’t be made if a court finds that the agency unreasonably drew out final resolution or if there was a violation of section 615.

Voluntary mediation is another route of resolution.  Another approach is on the state level, where procedures have to be provided separate from due process procedures in order to resolve complaints.  Anyone can complain to the State that a public agency has violated certain regulatory provisions.  Bringing the State process into the mix may result in due process determinations being tabled while State complaint matters are resolved.

Analysis by the Department of Education 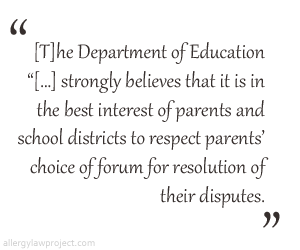 The costs to everyone increase with this type of conduct.  The letter plays out scenarios where a parent may refuse to participate in the due process case and be penalized or, if they do participate, have to take a drawn out and contentious path to resolution.  The due process route is more complex, for example, than the State complaint route, so a public agency would know the ins and outs of the former, leaving a parent at a disadvantage.

Encouragingly, the Department of Education “[…] strongly believes that it is in the best interest of parents and school districts to respect parents’ choice of forum for resolution of their disputes. A public agency’s filing of a due process complaint while a parent’s State complaint resolution is ongoing could result in preventing the parent, who may not have the resources to participate in a due process hearing, from exercising his or her right to engage in dispute resolution through the State complaint process.”  Id. at 4.

What this means for food allergy families

Even though IDEA isn’t usually part of the mix for food allergy families (see the discussion in this post’s introduction, above), the message is clear and good news for those facing public agencies such as schools when seeking a FAPE for their child with food allergies.  The ultimate goal is serving the student in question in the least adversarial and costly manner, so strategies like filing a complaint in another forum just to gum up the works are frowned upon by the Department of Education.  Whether the law will change down the line to handle the concerns the Department details in the letter remains to be seen, but in the meantime, a letter like this would hopefully change the tone of FAPE disputes from the perspective of schools by association.

The unfortunate aspect in all of this is that there are parents who have experienced the gamesmanship described in the letter and have potentially suffered harm because of it.  Hopefully collaboration will occur without escalated legal proceedings when a child’s education is concerned, however, knowing there are procedures to assist when an impasse is reached can also be a source of comfort.